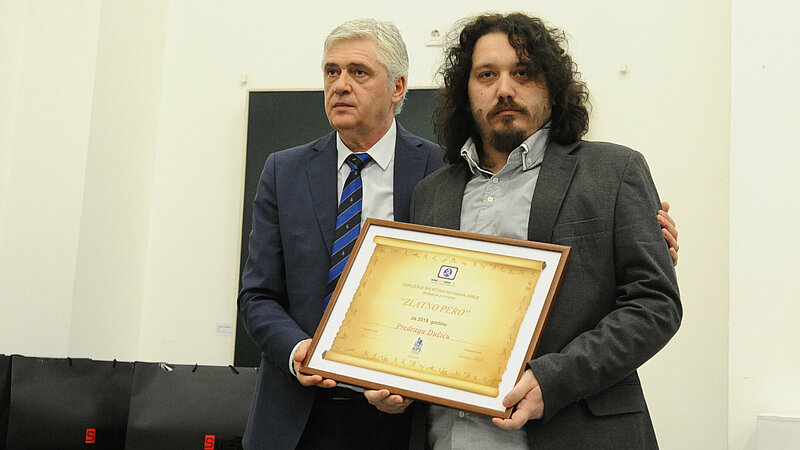 We are especially pleased to dedicate the following lines to our colleague Predrag Dučić, named the best sports journalist in the country, who shared with us what he likes to write most, what we should not give up and why the environment in which we work is crucial for the results we achieve.

Although we are used to being the best in everything we do, be it our core activity of organizing games of chance or giving examples to others what sustainable business is, we received the news that our colleague Predrag Dučić, from the Mozzart sport portal, was named the best sports journalist in Serbia in 2019 with complete enthusiasm.

The way Duča writes was more than well known to his colleagues from the editorial board and loyal fans, and thanks to the insight of the Association of Sports Journalists of Serbia, which awarded him the prestigious "Golden Pen" Award, Predrag's work is now known to the entire nation.

In the strong competition of journalists from all influential local media, Duči was awarded "Golden Pen" for his series of research texts in which he focused on the greatest legends and stories of Serbian, Yugoslav and world football, and which due to their exceptionality belong to the form between journalism and literature.

Regardless of the fact that we at Mozzart do not have a problem with fame, which is why there is no fear that popularity will spoil Duča, we will use the privileged status we enjoy with him to bring you his character and work a little closer.

Who are your literary and journalistic role models??

I will list the journalists, and they are, in all their characteristics - the style of writing above all - also writers: Zvonimir Magdić, from our region. I am sorry that I "discovered" him only seven or eight years ago. As for the foreigners, they are Eduardo Geleano and Gianni Brera. Unfortunately, none of them are alive today. And, I forgot Zidak, he also belongs to "ours".

I guess all your texts are "like children" to you, but do you have any favorite one?

I prefer the ones about some unknown or less known football players, events. It's a nice feeling when you reveal something new to someone, something they haven't heard or read about. If I have to decide which is my favourite, I would say it is "Ugly Angel from Nedodjija - a small ode to fantasies". I think that was its title ...

Since these are all more like research ventures than texts, which was the most demanding for you, and why?

I dedicated the most attention and time to the story of the football players of Manchester who ended their lives when they were returning from Belgrade, from the match against the Red Star, and died in a tragedy in Munich. Having in mind that they spent the last night in Skadarlija, that story also concerns us, Belgrade and the former state. And why did it take a long time ... I tried to write less about the game itself, about which everything had already been written, and much more about the details of that friendship between the two teams. And the tragedy itself, of course. Most of the time was spent obtaining the material, the data. And then, if you have to arrange a meeting with the interlocutor, the source ...

How long does it take to produce an article, having in mind everything that you have to research and the data you have to collect in order to write it?

Part of the answer to this question was given previously. Writing itself doesn’t take too long, four to five hours effectively. Sometimes a little longer, maybe ... I still use only two fingers to type ... :) And to collect everything, read it, when it needs to be translated - another two hours or three times as much. It depends on the story. The longest part is starting to write :) That's the hardest thing for me.

Can we say that, in this age of short and instant texts everyone insists on (with the argument that readers no longer pay attention to anything today), this award, and the number of readers of your articles in general, show us that people still want great stories, and that the point is not really in brevity, but in quality?

I am quite convinced that the younger population, or rather its vast majority, does not even read short texts. People fly through the headlines and that's it. Mostly. But of course, there is also another group of people who like to read bigger stories. Ultimately, we are one of the few portals where such things can be found. For such a population, it is worth the effort. I don't think we should give up on that, regardless of the trends.

I will not ask you "to tell us your secret" because the answer is extraordinary talent, but do you have any advice for journalists in general, especially because people want to read good quality stories, but obviously most media do not know how to provide them with such content (or maybe they're just afraid no one will read it)?

Uh, that's a very complex issue. We could talk a lot about it ... But I could answer this questions as briefly as possible: I am lucky to be working in a department where I am allowed to write about whatever I want and whenever I want. And that is a rare case. Especially in daily newspapers. Of course, sometimes there are also some grounded limitations. Actaully, I have no specific advice. First you must struggle for and win the position to do this business, and not some banal matters.

How important and significant is the atmosphere in the editorial board and the support of colleagues for your writing (although the better word is creation)?

I didn’t take my older colleague seriously when he was telling me how he was choosing a job. He says - the first thing that interests me is who I work with, who my editor is, then where the editorial board is (he fled from New Belgrade), and only then what the salary is. I'm starting to understand that. I do not believe that there is a better environment in an editorial board in Belgrade than in ours. There has been no single quarrel here in ten years. At the same time, we all spend a lot of quality time together privately.