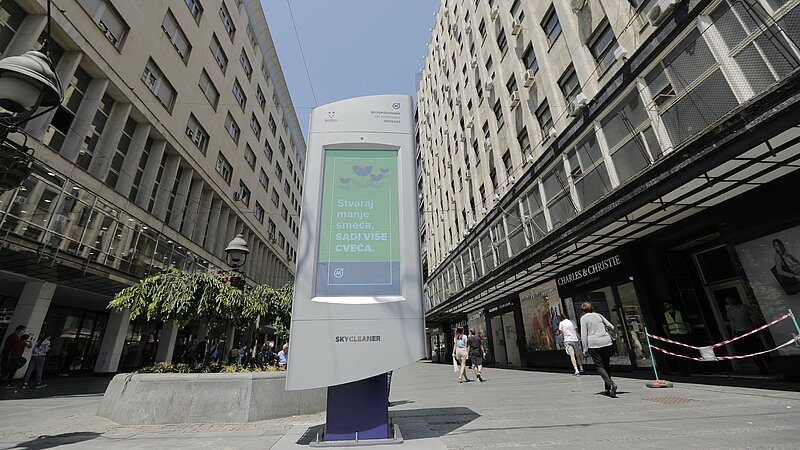 On the World Environment Day, Belgrade stood shoulder to shoulder with the world's metropolises! At the initiative of the City and the Mozzart, the citizens of Belgrade obtained an innovative air cleaner that was installed at the beginning of Knez Mihailova Street. The concentration of unhealthy particles in the air, which due to the population density and high frequency of traffic, is especially high in the central city quarters, will become a thing of the past thanks to the Serbian product with a symbolic name. – SkyCleaner.

The innovative device, which will bring the effect of mountain air in the heart of the city, is designed to work 365 days a year, and cleans as much as 180,000 m3 of air in 24 hours. With the help of free ozone and patented ionic technology, this kind of "sky cleaner" sucks over 75 percent of the most dangerous particles from its environment (PM1, PM2, PM10), keeps them in the device, and then releases purified air, creating an oasis of clean air around the device.

The City of Belgrade and Mozzart recognized the importance of this ove innovative technology, both for air quality and as support to our innovators.

This device carries a symbolic message that June 5 is not only the day of environmental protection, but that every day we must take care of nature and of the planet, our common home. Mozzart has been organizing many eco-actions for years, but the most important thing is to act on a daily basis and contribute to resolving burning problems, such as air pollution. The device will purify the air in one of the busiest locations in the city, which is surrounded by major roads, and at the same time it will constantly send messages that raise environmental awareness among our fellow citizens and remind us that environmental protection starts from ourselves, that each individual can contribute a lot. – said Borjan Popović, director of the Mozzart’s Corporate Communications Department.

This Serbian product extremely effectively removes the most dangerous particles in the air, which are most present in the central quarters of the city. The device uses patented Dutch technology tested at the University of Eindhoven, and is already used worldwide in places where there is a high frequency of traffic and population density.

Belgrade became the first city in this part of Europe to receive such a device and thus managed to appear on the list of metropolises that successfully solve the problem of air pollution with innovative outdoor cleaners for public areas, which are also the latest technology in this field. After Rome, Milano, London and Berlin, where similar devices were recently installed, the state-of-the-art technology arrived in the heart of Belgrade - in Knez Mihajlova Street.

This Serbian product is the result of cooperation between our best industrial designer and professor at the Faculty of Applied Arts in Belgrade, Marko Luković, the first Serbian company for production of LED screens "Elsat" from Čačak, with the assistance of a team of designers Predrag Bajović and Aleksa Jevtović.