RAŠKO KATIĆ: A GOOD CAREER CAN BE MADE WITHOUT PERFECT TALENT AS WELL 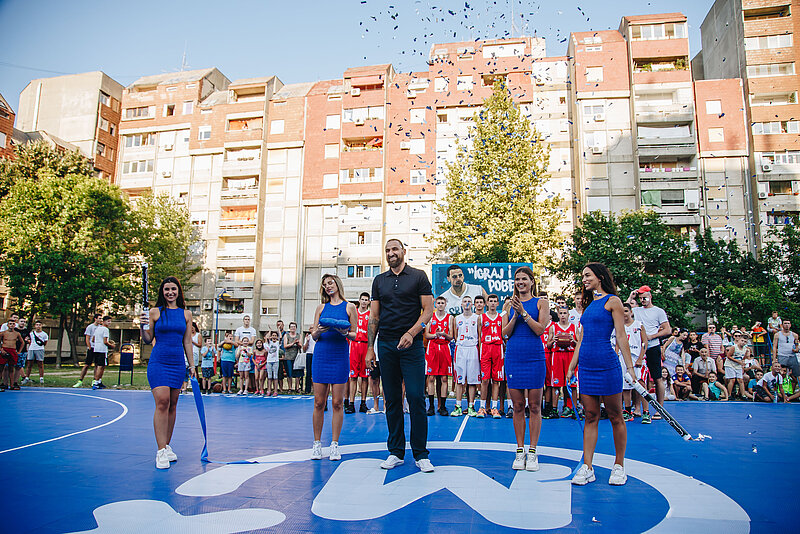 He started playing basketball only in his late teenage years, but that is why he scores with a zeal of a young man in his fifth decade as well. The energy with which he tried to bring "gold that is golden" from the World Cup 2014 and still has in Radnički's jersey, he selflessly conveys to young talents with the message that even without a perfect junior career, it is possible to achieve something great. Raško Katic leaves basketball to the younger citizens of Kragujevac, and his teammates from the club and numerous fellow citizens paid tribute to him in his hometown, at the opening ceremony of the basketball oasis in Aerodrom, as part of Mozzart's action "One Hundred Courts for One Game".

The beautiful 88th playground was reconstructed in the city where many celebrated aces of Serbian basketball took their first steps. The modest silver medal winner from the 2014 World Championship in Spain will never say that he belongs to that group, but he will be remembered as the guy who deserved the national team jersey with his heart, great fighting spirit and commitment. The silver medal around his neck, numerous club cups and this playground renovated in his honor are proof that Raško has left a deep mark on the paths of success.

"It is a pleasure for me that I can open such a beautiful playground. I was not born in the settlement where the playground was built, but I was born in the town where it is located. I would like to be an example that something can be small and different, without perfect talent, ideal pioneer, cadet and junior experience, but with a lot of effort, work and will. I would like the kids who are not so perfectly talented, but have a lot of desire, to make their first steps and show that the last ones can be the first. I never felt basketball as my profession but as a game. All children who follow in these footsteps, regardless of whether they are football players, basketball players, should understand sports as a game, and the results will come on their own," said Katic.

All his teammates, the cadets who played the exhibition match, as well as the hundreds of gathered citizens from the settlement of Aerodrom, first enjoyed the retrospective of a great career.

"Do you remember who came up with the idea to create an anthem for basketball players before the World Cup in Spain?" "Who is the man who made his show on the balcony when the people were loudly singing - bring home the gold that is golden" the host asked, and then the people started joyfully shouting "Raškoooo Katiiiić" between the buildings, and over the loudspeaker "Play and win, come back proudly"!

"The presence of a large number of children and youth, the satisfaction and joy we see here, tell us that this is the right thing to do," said Predrag Stevović, a member of the City Council for Sports. "Since the beginning of his term of office, Mayor Nikola Dašić has set us the goal of strengthening the sports infrastructure, opening the playgrounds. We talked with Mozzart about determining the location for the playground at the end of the last year, and I am glad that they dedicated it to our celebrated basketball player and great local patriot Raško Katic, to whom Kragujevac and Radnički owe a lot.

In Serbia, basketball is played almost everywhere, and it is on such courts that the first steps were made by players who made great careers.

"We hope to welcome some of these kids, who had the opportunity to test the new court first, on the famous balcony. Thanks to Raško Katic for his support and for showing the children with his example how to achieve great results with a lot of work and commitment. We also owe gratitude to the local self-government, Mayor Dašić and member of the City Council for Sports Stevović for the great logistical support, persistence and efforts to provide Kragujevac with as many such places as possible, because there is no doubt that it is a city that deserves it. We have a common goal - to raise the quality of life in the local community as much as possible ", said Borjan Popović, Director of the Corporate Communications Department at Mozzart Company.

At the very end of the ceremony, a competition in shooting 3-pointers was organized, and the most successful players won valuable cash prizes. Traditionally, every opening of a playground has a humanitarian character, because for every 3-pointer scored on the new playground Mozzart donates money, which this time went to the fund for treatment of Boško Gugleta.