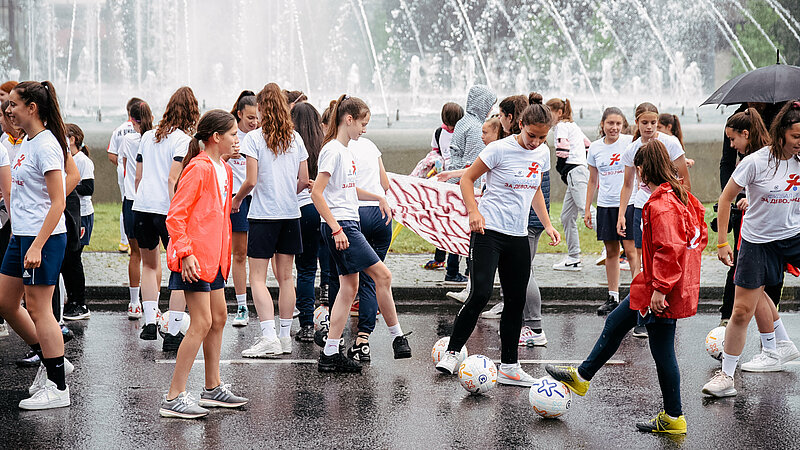 They are not stars and you’ve probably never heard of them ... They are the most important unimportant thing in the world of football. And they don't want to be on the margin anymore. That is why, in the middle of a rainy Sunday morning and a lull before a stormy day at the European Championship for men, they stopped the traffic on Slavija in order to draw attention to the existence of football in Serbia, the women's one!

Before you say that an Englishman or a Dutchman today plays as a girl, think of the hundreds of those who train every day across the country, but also of the "anonymous players" whose names are chanted across Europe, such as Nevena Damjanović and Jelena Čanković... More than 100 female football players, led by players from Spartak, Red Star and other Mozzart Superleague clubs, as well as by freestyler Djoto, have rolled the balls in the biggest Belgrade roundabout this morning, with a clear message that fifteen minutes of traffic jam is better than the collapse of women's football in Serbia. The banner was even clearer - Football is for everyone, football is for girls.

"The world doesn't have to stop so that we can play this sport, we are certainly a big part of it. By stopping the traffic at the roundabout on Slavija, we wanted to draw attention to all the girls who play football. I am very glad that such a campaign dedicated to women's football has been launched! I am proud of everything that the Football Association of Serbia together with the company Mozzart did for us and I hope that a large number of girls will respond and start training football, as well as that the people will hear even more about our results - said Milica Kostić, goalkeeper of the Serbian national team.

Sirens, applause, standing ovations, tension... There were all these things among the drivers who were caught in the trap of women football players, as if the derby of the day at the EURO between England and Croatia was being broadcast. Juggling with the balls, dribbles, “falling leaf“, “heel kicks“... Joga bonito in the Serbian fashion circled around the fountain on Slavija Square with a symbolic message that not everything is based on strength in the world of football.

These girls compete like men as well. They train with the boys and say that is why they are better and better. They also have the right to dream of the World Cup finals in front of 60,000 fans, as experienced by the American and the Dutch female players in 2019. Jelena Čanković, former football player of Barcelona, and now of the Swedish club Rosengard, says that women, in another part of the globe, play the same Champions League under the UEFA flag.

Our female national team members, that is, members of the Mozzart Super League, no longer want to hit the living wall of prejudice. That is why during this "third half", they let their imagination run wild on Slavija and played the most beautiful football dance to the sounds of the Radetski March from the fountain.

These moves, as well as the team game for the victory of women's football, elicited applause from the entire men's national team of Serbia, so the messages of support came even from distant Japan. One special was sent by the "eagles" manager Dragan Stojković Piksi:

"Personally, I have a very positive opinion when it comes to women's football. In the last 15-20 years, women's football has been developing with tremendous speed, it has become extremely popular among girls. Full support to all these girls, play football, enjoy football, you will see how beautiful sport it is. We are with you! ”