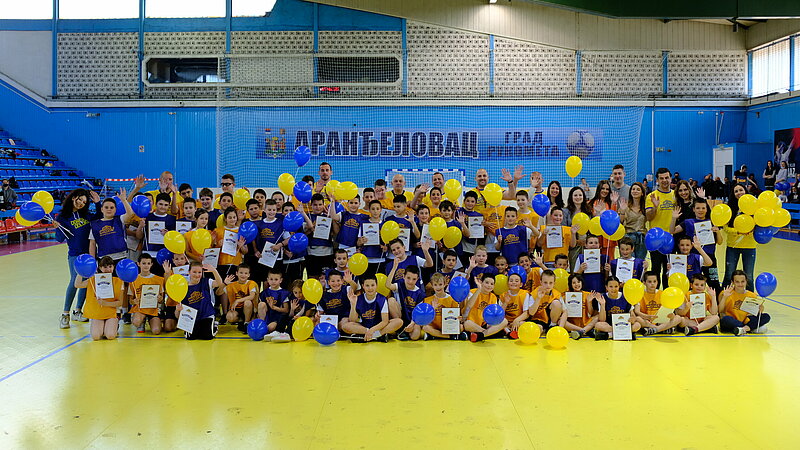 Nikolić: Mozzart, thanks for choosing our sport for the Free Schools project. Škrbić: If our parents had to pay membership fees, we might not have become successful athletes and national team members

Run, throw, now jump-shot…. It was shouted in the "Šumadija" hall where Ratko Nikolić, Dragan Škrbić and Vladimir Cupara showed tricks with the ball to kids who dream of scoring goals or defending shots. The little champions from this area got support from the celebrated aces, and dozens of children will be selected for Mozart's free school of sports.

The game started in Belgrade, in the open football class, continued in Niš with basketball, and now it's Aranđelovac's turn!

The owner of the bronze medal in the World Chamionship and former captain of the national team, Ratko Nikolić, says that they decided for this city because of the long handball tradition.

Once the best handball player in the world, Dragan Škrbić, revealed that he decided to play handball at the age of 12.

About 70 boys and girls aged 8 to 13 will have the opportunity to train for six months for free.

The goalkeeper of our national team, Vladimir Cupara, made his first steps in HC Voždovac, where they allowed him to train without paying a membership fee, and then he made a great career.

Let us remind you, Mozzart's project was supported by the Ministry of Youth and Sports, and it is still possible to apply for volleyball trainings in Belgrade.