MOZZART BECAME THE GOLDEN PARTNER OF THE UNIVERSIADE! 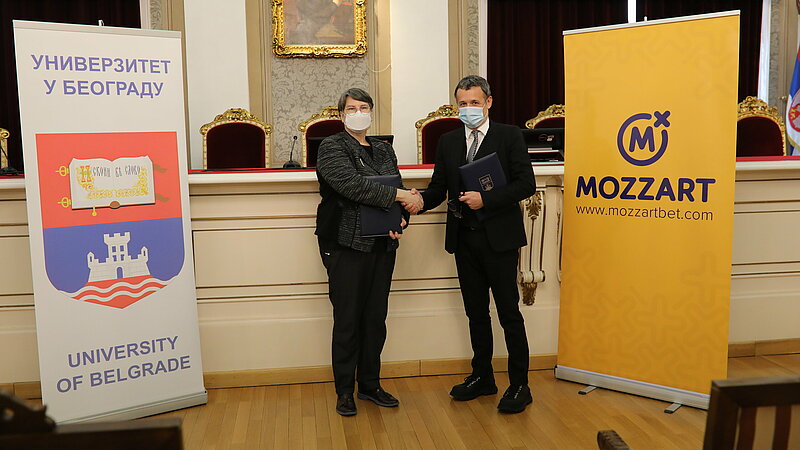 Mozart's support for student sports is for textbooks - this company has become a golden partner of the Rectorate of the University of Belgrade for the "European Universiade" Project. The European University Games will be held in Belgrade from July 14 to 27, and the regional leader in providing games of chance will again be the loudest fan of athletes – university students. The Rector of the University of Belgrade, Ivanka Popović, and the General Manager of Mozzart, Slobodan Prodanović, signed a golden partnership agreement, which is the crown of the long-term cooperation.

The Rector pointed out even earlier that Mozzart, as the general sponsor of the entire university sport, returned the sport to the faculties. Now that kind of support is moving to the highest, golden level, because this company will provide great help in organizing the most important sports event in the country this year.

In addition to supporting student leagues, Mozzart donates equipment to these teams through the "New Jerseys for New Champions" campaign, and at the same time renovates basketball courts across the country as part of the "100 Courts for One Game" Project.

"When you’ve been in the world of professional sports for so long, you just want to relax among these children who can only offer you their sincere smiles. I am grateful that I got the opportunity to attend a class like this, to tell them a few more things and encourage them to play handball even more. My wish is to constantly visit cities all over Serbia, because that is one of the ways to help clubs and keep talents a little longer in the national championship. They may earn money faster abroad, but they will not have so much opportunities to develop", it didn't take long to Đerona to see the core problem of the Serbian handball.

Our players regularly win titles with the best clubs, but the national team does not have a real base in the younger categories.

"Serbia has never lacked talents, but it still needs a lot of good work. When I took over the team, I had an individual interview with each player. Even those who won the Champions League told me that they would change that cup for bronze in the national team. I knew right away I wasn't wrong. The pride they feel is the strength of this team and I expect that it will push us in difficult moments".

For the first foreigner on the bench of the "Eagles", this hot Balkan mentality is not unknown and he is completely delighted with the zeal with which the boys played the matches against the French in the qualifications.

"I understand that the Serbian people may find it strange that both the women's and men's national teams are led by foreigners currently, apart from so many good professionals and legends. But that has become normal in the world of handball and sports in general. We learned from Pokrajac in Spain. Players of different nationalities are mixed in the clubs, now also in the national teams. When we are inside a handball court, we all speak the same language and that is what’s most important. In the end, it all comes down to whether you win or not, not whether you have a Serbian passport. If you win the match, the pride of all of us will be the same".

In a short time Toni managed to unite and strenthen the national team, for which he used the expression “todos somos una piña”. It is difficult to be translated into Serbian – approximate meaning is that the players are united like a pineapple, but suffice it to say that it was the name of the fan anthem of the Spanish football players for the 2010 World Cup, which was won by the "fury".

"The greatest strength of these players is, without a doubt, unity. From the first moment, whoever was in the national team, the group was united. And that is the most important thing for what every game is built on - for defense. We have great defensive players, great goalkeepers, and we still have to work on the attack. This team definitely has the quality to orderly play the second phase of the championship, to try to make that step towards medals. They lack experience from those matches when it is time for great things to do, we lack players who regularly fight for medals, but we have those who fight for big trophies in clubs ".

In the group at the European Championship 2022, the "Eagles" will meet the French again, the Croats became a regular rival at big competitions, and Ukraine seems to be the only certain victory.

"I am convinced that we can win all three matches in the group, but we must be aware that two of the three opponents have a plenty of medals behind them. They regularly play World Championships, Olympic Games… But, for us, such matches are the most important, if we want to make a step forward, we have to meet the biggest ones someday. All of us who work in sports live for that challenge. Even before I heard who we are in the group with, and even now, the goal is the same - to enter the second phase. So let's see what will happen. There is at least one Serb in every big club. It is time to unite them towards the same goal in the national team. I repeat, they all want that medal much more, than club trophies. I saw that whenever the guys gather together, they work abnormally hard, they sacrifice time with their families for Christmas, now and much-needed summer vacation after hard club seasons".

Some of them even managed to visit the Free Handball School in Aranđelovac.

"Maybe these children don't know much about Ratko or Škrba, but when one Vladimir Cupara joins them in training, who they can regularly see on television and celebrate his defenses on the goal of Serbia, such memories remain for a lifetime. It is very important to connect children with their idols. That is the advantage of our sport, handball players never act like stars, even though they are.", says Toni Đerona, who tries to make our handball stars, members of the national team, playing even better.